News
You are here: Home1 / News2 / News3 / Smartphone, Not so Smart Posture: How Texting Adds Pressure to the Spi... 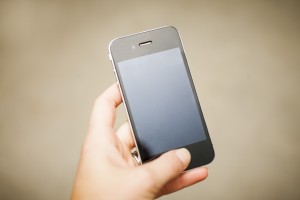 Living in a world of technology has made many aspects of life a lot simpler, but the damage being done to your back can be extremely dangerous. Staring down at our smartphones causes a huge amount of unnecessary pressure on the cervical spine; we take a closer look at the issue.

It may be one of the most impressive and useful inventions of our lifetime, but the smartphone can cause a great many problems for its users. The body has a natural posture in which the weight of the head is accurately displaced, making it easily handled by the spine. The average weight of the head is between ten and twelve pounds, a number which greatly increases with the unnatural way in which people arch their necks to look at their smartphones.

So just how bad for you is it? The portion of the spine above the shoulders, known as the cervical spine, receives the highest increase in pressure. If a person tilts their head to a sixty degree angle, they are putting around sixty pounds of pressure on the cervical spine. This number may seem rather dramatic, as many people do not tilt their heads to that degree simply to look at a phone, however just a small amount of tilt – fifteen degrees – can cause up to twenty-seven pounds of pressure.

There are many issues that can be brought about through incorrect posture, namely an increase in pain in upper areas of the back and spine. Unfortunately, the level at which many people use their phones is surprisingly high, with the average person spending between two and four hours a day using their handheld tech.

So how do you combat these problems when it is so hard to get away from technology? Well, the good news is you do not have to give up your smartphone or tablet, just noticing errors in posture is enough to change them. A good posture is usually described as having the shoulder blades retracted and the ears aligned with the shoulders, meaning a a straight neck and a back which is not hunched forward. While it can be easily forgotten when entranced by our apps or sucked in by a selfie, having the spine correctly aligned is the best way to stave off any unwanted aches and pains, or an even worse case of repetitive injury.

Changing the way in which you stand, sit and work is the best way to encourage a healthy posture. Looking at areas in your day to day lifestyle after which you notice pain occurring more frequently allows you to assess the need for these tasks, and how you can approach them in a more physically healthy way.

As with all technology, from laptops to smartphones to tablets, their immersive nature can stop us from thinking about what we are doing on a physical level which can have a detrimental effect on the health of the spine. So next time you get a text whilst taking a ride on the London tube network or just have to play Candy Crush, sitting upright with the spine aligned correctly can ensure you have just as much fun, without the added worry of never-ending back pain.

https://www.backinactionuk.com/wp-content/uploads/BIA-Website-Logo.png 0 0 Charlotte Waller https://www.backinactionuk.com/wp-content/uploads/BIA-Website-Logo.png Charlotte Waller2014-12-17 19:48:592014-12-17 19:53:55Smartphone, Not so Smart Posture: How Texting Adds Pressure to the Spine
How Much Does Absence Cost Your Organisation? Find Out More

4/5
Rukia
Payroll
“Within my first session, my physiotherapist was able to identify and then treat the problem with my back. They then she showed me various exercises that would prevent recurrence. She is very professional and very friendly. I would definitely recommend Back in Action UK to anyone in need of Physiotherapy in the workplace. Thanks again for all your help”
5/5
Matthew
Health and Safety Manager
“Since Back in Action UK have been working with our company we have seen a large decrease in lost time in musculoskeletal injuries due to their efficient treatment and modern techniques. The staff are always courteous and friendly while maintaining a professional approach. This service has raised employee morale and shown our company in a caring, supportive light. I would not hesitate to recommend Back in Action UK to any company who needed a physiotherapy service.”
Show More
The State of the Nation’s PainWork Out at Work: Top Ways to Increase Fitness and Decrease Work Stress in ...
Scroll to top